Paella Westerns in the Almeria Desert

Paella Westerns is what they should have been called. Forget all that nonsense about Spaghetti Westerns. They were filmed in Spain so from this day on you should refer to them as Paella Westerns! The incorrect nomenclature was actually a slightly derogatory term taking aim at the Italian origin of the directors of the low budget cowboy films which were filmed around Tabernas, in the heart of the Almería desert. 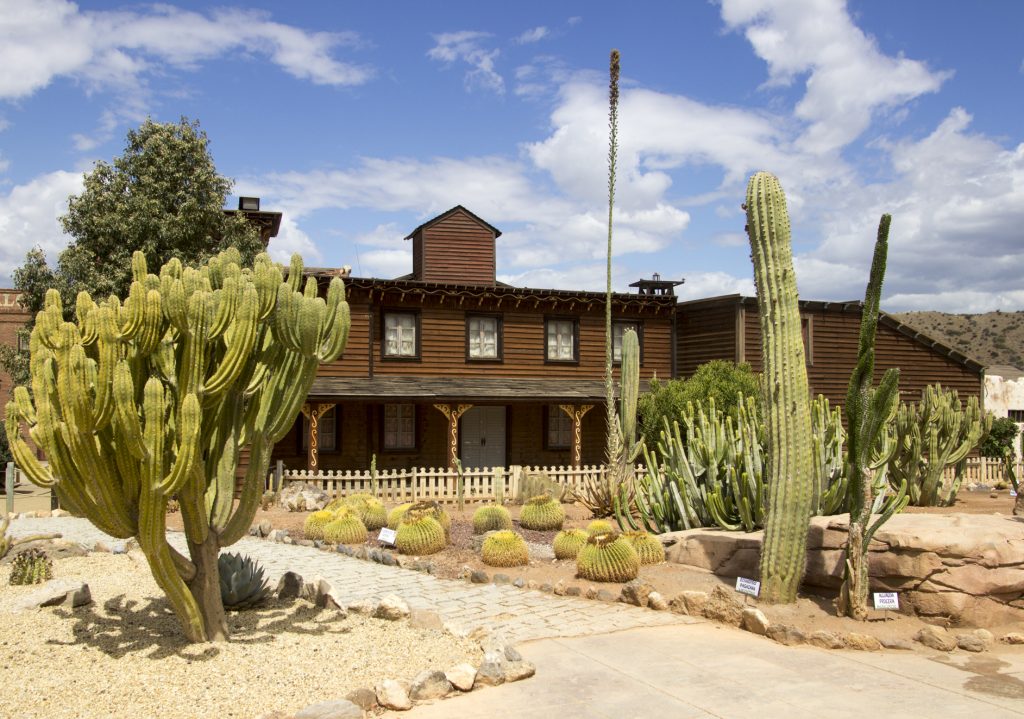 You don’t have to be a huge fan of the Western genre of films to enjoy a trip to Tabernas and the nearby film sets. There are three to choose from. Fort Bravo and Western Leone are purported to give you a more authentic feeling of the film set but for someone who isn’t that fussed about the authenticity of what they are seeing and is looking for a more rounded experience, Oasys Mini-Hollywood offers a lot for a few dollars more. Actually it’s only a couple of Euros more expensive and there’s enough there to spend the whole day on the site.

Oasys Mini-Hollywood was the actual location for the town of El Paso in “For a Few Dollars More” hence the dreadful pun in the previous paragraph! Nowadays it’s something of a theme park. As you walk in you pass through the dusty streets with very typical Paella Western buildings all around you. The shops are full of memorabilia and costumes, and you can sit in the bar drinking a beer while watching a very raunchy can-can show. There’s a cinema museum containing the posters for a huge number of films which were made in the area (but not necessarily on site) and several cinematic cameras. The highlight though is the recreation of a scene from a Western. It was quite extraordinary seeing the horses race through the sands as the sheriff and his deputies tried to round up the outlaws. The gunfights were fabulous but I have to question the hanging scene. It seemed a bit too graphic considering the young age of many of the visitors.

In addition to the Western experience, there’s also a zoo. All aspects of the animal kingdom are on display and the enclosures don’t seem too bad. Zoos get bad press, but the animals here appear to be genuinely well cared for. There was also a bird show which was a lot of fun. Add on to this the swimming pool complex and you could really spend all day there.

From the town of Tabernas you can climb up to the 11th Century Moorish castle. It’s a hot, dusty climb but not too difficult. Once up at the top the views of the desert are stunning. There’s an information board, albeit in poor condition, pointing out various filming locations in the distance.

We stayed in the Casa Rural Jardín del Desierto and we really can’t recommend them highly enough. Don’t fret if you’ve read that they don’t speak English in there – the owner has enough to get you sorted out, and is very patient with you if you try to speak Spanish. It’s a great base for exploring the area and they have a lovely little swimming pool to cool off in the afternoon. They also serve wonderful freshly cooked Spanish food in the evenings.