We all know that Spain is an amazing place to visit. People from around the world flock to the country every year, so it should come as no surprise that our feathered friends are just as keen on coming here as we are. Some even stay longer than expected. I guess lounging around by a Mediterranean salt lake is preferable to flying all the way to Algeria just for the winter, especially if it stays mild on the Iberian Peninsula! 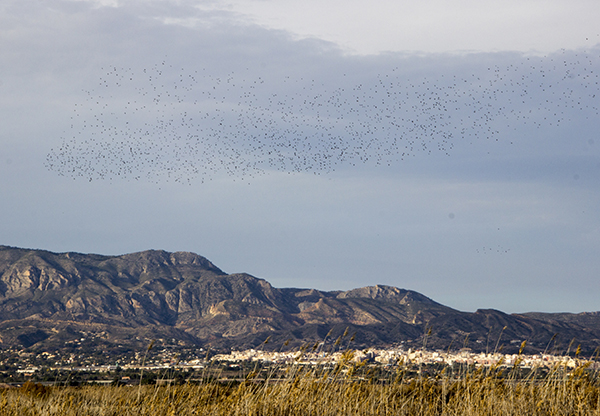 Bird watching has had some bad press over the years, but you don’t need to be a dedicated ornithologist and an anorak clad twitcher to enjoy seeing birds in the wild. Anyone can have a great day out and you are guaranteed to see quite a few birds no matter where you go. Here are five places to visit all within easy reach of the Costa Blanca South. Remember to take a hat, sunglasses, binoculars and mosquito repellent with you. The latter is particularly important if you want to keep your sanity.

El Hondo, confusingly also called El Fondo, is located between Elche and Crevillente. It was designated an Area of Outstanding Natural Beauty back in 1988. Consisting of two wetland reservoir areas, it has over 1000 hectares of water, marshland and vegetation hiding myriad species of birds. 172 different birds have been recorded at El Hondo making it a magnet for bird enthusiasts for many years. There is a visitor centre giving access to various walkways and observation hides where the abundance of avian life is within easy access. One of the most important stopovers for migrating birds in Europe, this really should be top of anyone’s list. Get there at dusk and you’ll also catch a glimpse of the murmurations of starlings as they swarm into weird and wonderful patterns in the sky. Look carefully in the reed beds and you might glimpse a purple swamp hen. 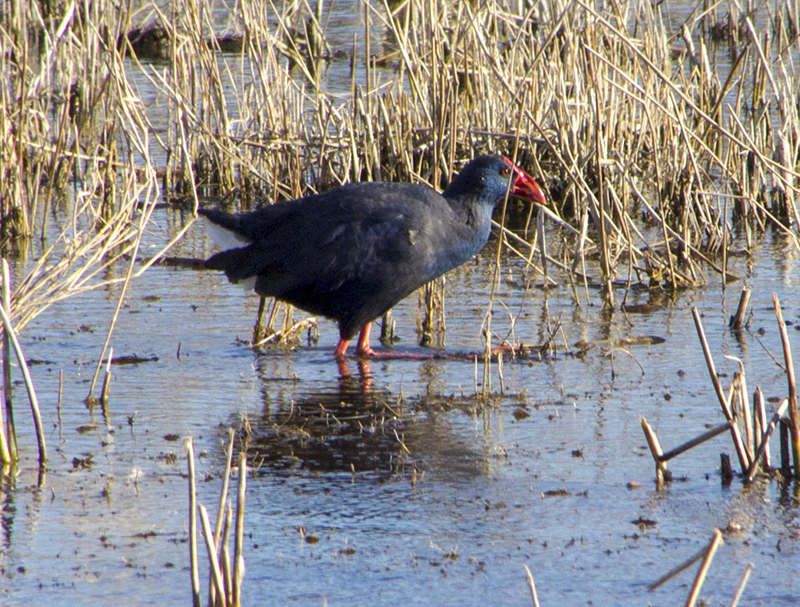 The La Mata and Torrevieja Lagunas consist of two distinct lakes. Closer to Torrevieja is the bright red salt lake but its near neighbour, the blue lake of La Mata, is a much better bet for getting up close and personal with nature. The visitor centre is bursting with information about the local ecosystem and there are a series of networked footpaths around a large proportion of the lake. Unfortunately they don’t link up to form a circular route around the lake, but there are a few observation hides scattered along the way which make it much easier to look closely without scaring anything away. Birds can be seen on the lake and if you are lucky the flamingos will be close enough to view. Don’t forget to wander through the vineyards too, where many smaller birds like to hang out. 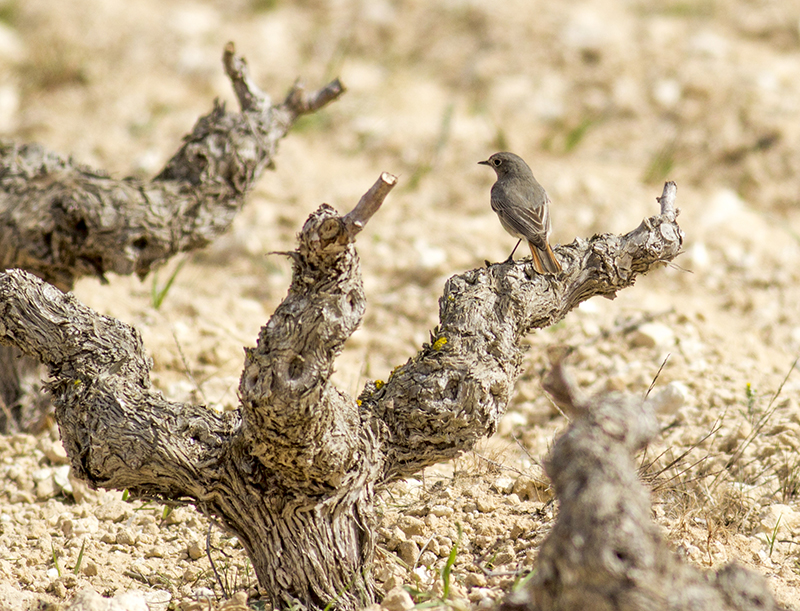 El Pinet is the beach at the northern end of La Marina. Just inland from the car park is the entrance to a small but interesting nature reserve. On the shallow lakes you will see avocets and stilts in great numbers but continue on the sandy tracks and eventually you will reach an elevated viewing platform giving splendid views towards Santa Pola. With a bit of good fortune, the flocks of flamingos will be on the salt lakes on the sea side of the N332 for you to see. Even if they are not, it’s quite a spectacular spot from where to admire the local countryside. 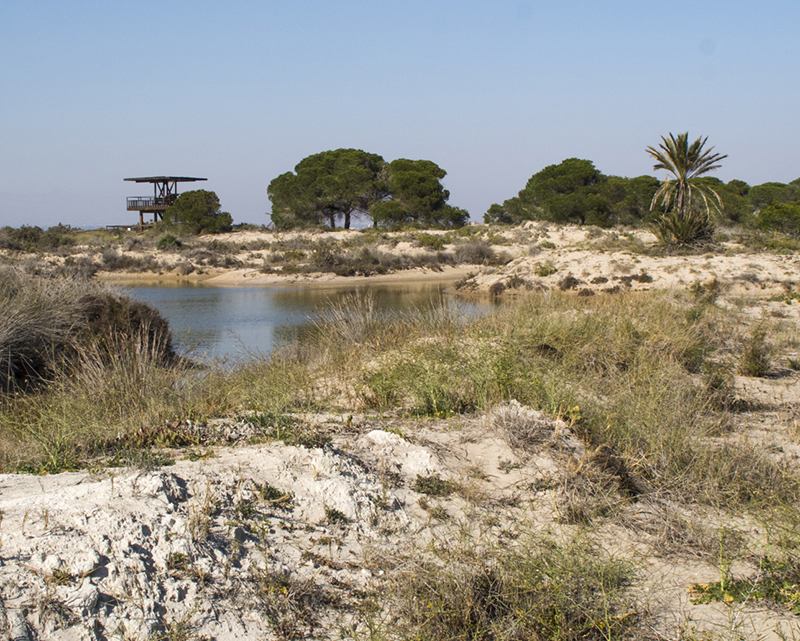 Between Guardamar and Santa Pola you can’t fail to notice the enormous expanse of salt lakes. You’ll probably see the huge salt mountains by the side of the road too. About half way along the causeway there is an old tower which once formed part of a large irrigation system. Park up near there and you’ll have easy access to a million seagulls who live nearby. Ok, so that might be an exaggeration but there are too many of them to count. Not far away you will be able to see great numbers of flamingos. They seem to have decided to stay here year round over the last couple of years. The mature birds glow pink in the sun whilst the juveniles are resplendent in black and white. Their numbers appear to be growing exponentially year on year so it would be difficult not to see them. It’s just a shame that nobody has yet developed a series of walkways for keen observers to take. There are some who take their lives into their own hands and walk alongside the busy N332, but you do that at your own risk! 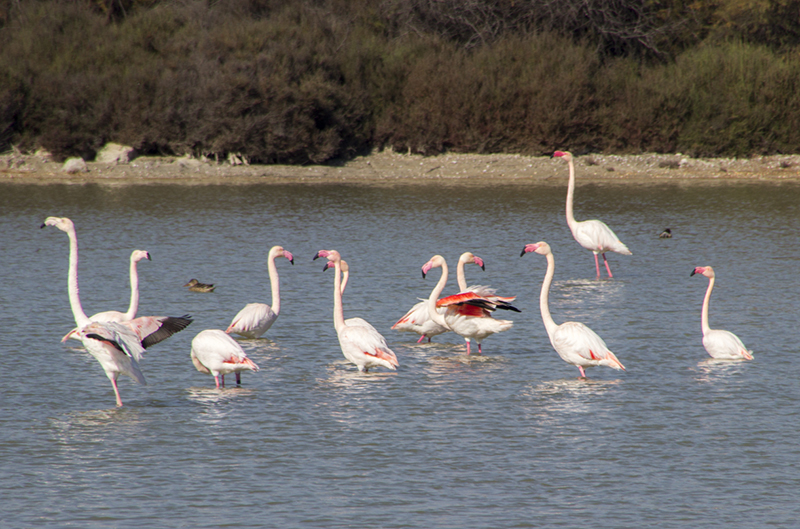 Finally to Lo Pagan. It’s not strictly on the Costa Blanca but it is so close that it cannot be ignored. Just a few miles further south from Orihuela Costa you can often see large numbers of flamingos in the salt lakes either by the road leading to San Pedro del Pinatar’s marina, or on the walkway past the mud baths of Lo Pagan. Many other species can be seen but the flamingos often steal the show. It’s a pity because the avocets and stilts deserve a lot more attention than they get. 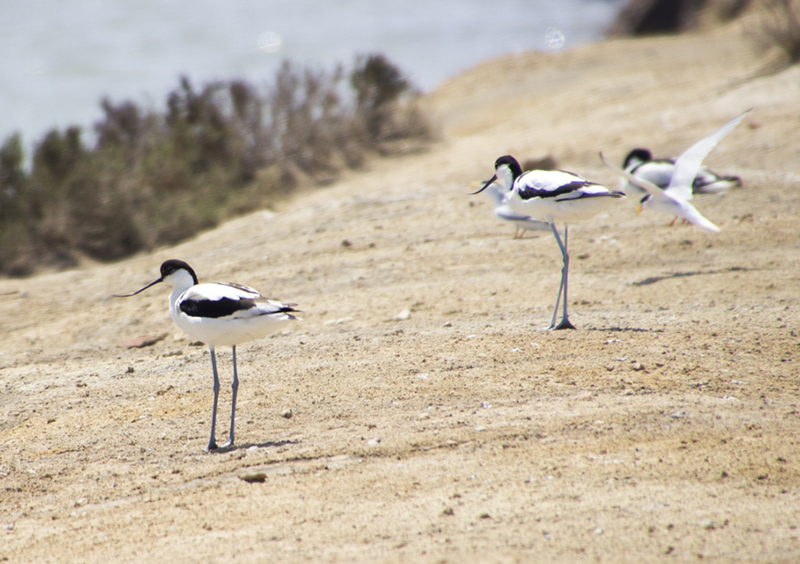